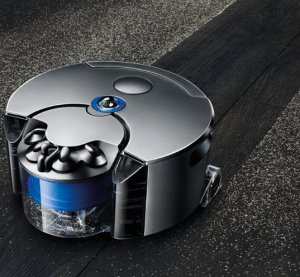 Say hello to the Dyson 360 Eye Robot Vacuum Cleaner! It’s without a doubt, one of the best robot vacuum cleaners we’ve tested to date. The Dyson 360 Eye is a compact robot cleaner that is equipped with sensors, a 360-degree camera for navigation, and easily controlled by a companion app. It delivers an exceptional build quality and features the same high-performance cleaning, we have come to expect from the brand.

Dyson is a company that is known for its reliability, high-performance appliances, and long-lasting build quality. The company first started selling bagless vacuum cleaners in the 90s and has never failed to impress the audience with its cutting edge technology. The company ventured into the robotic vacuum cleaner market in 2000’s, given that iRobot’s Rombas and Neato Botvacs have been around for a long period.

The Dyson 360 Eye was launched back in 2016. It’s a heavy-duty robot vacuum cleaner that comes with many different features and easily controlled by a smartphone app. It’s the most expensive appliance in the Dyson family, costing anywhere between $900 – $1000 (depending on your country). But the real question is: Can it do enough to stand out against Neato and iRoot, which cost less and have to date dominated the robotic vacuum market?

Measuring  4.72-inch-high, you will find the Dyson 360 taller rather than wide because of the size of the digital motor tucked inside. It’s a variant of the same power used in Dyson’s cordless V8 range and hairdryer but adapted slightly to fit the vacuum requirements here.

As far as width is concerned, the appliance is just 23cm wide, which is a great deal narrower than its competitor models. The cleaner easily squeezes through narrow gaps and provides a much better cleaning in those tight areas of your home.

The robot vac has a top panel featuring start/stop button, plus an indicator light that informs you when the battery is low, robot’s bin is full, or it’s encountered an error. The panel is neatly designed, provides a clear view with a quick glance, and does exactly what you need it to do. What’s more impressive is that the vacuum also features a titular ‘Eye’ in the center of the top, which allows the robot to see and find its way around your home.

Flipping the robot vacuum reveals the large Dyson brush – made from stiff nylon bristles and softer carbon filament – that suits all types of floors. There are also two-track wheels underneath that allow the robot to navigate varying floor heights like door runners or thick rugs.

After the cleaning cycle is completed, the Dyson 360 Eye automatically returns back to its docking station, which sits against your wall by a plug socket.

Features Of The Dyson 360

With a strong 78,000 RPM motor, the Dyson 360 sucks dust particles on all types of surfaces with ease. Furthermore, the special Dyson brush which is roughly as wide as the 360 Eye itself, offers remarkable cleaning on both hard floor and carpet.

The robot cleaner relies on infrared sensors and a special 360-degree ‘Eye’ or camera that sits on the top of the vacuum to interpret its surrounding. With the help of this 360-degree camera, the vacuum easily maps out the perfect path, covering as much of the floor as possible, while also avoiding collisions with your room furniture or bumping into the family dog!

On the top of the device is a single start/stop button, which also doubles as a status indicator light informing you when the robot’s bin is full, needs a recharge, or it’s encountered an error.

Another impressive feature of the Dyson 360, is its tread-like wheels, making the vacuum eligible to travel over transitions between hardwood floors and carpets, and varying floor heights like door runners.

Let us get down to the main discussion – How the Dyson 360 Eye performs?  Dyson claims that the 360 Eye has “twice the suction of any other robot vacuum”, but does it really translate to twice the cleaning ability? Is this expensive appliance worthy enough to be purchased? Does it outperform its competitors like the iRobot or the Neato Botvac cleaners?

Before writing out the complete review of the Dyson 360, our team first tested it through a series of tests on the mid-pile carpet, low-pile carpet, and hardwood floor. On each surface, we scattered dust, sand, pet hair, and crumbs to see how the appliance performs, and Amazingly, the 360 Eye ended up scoring well compared to many of the robot cleaners we have reviewed.

The Dyson 360 Eye is ‘incredible’ at cleaning. With its high-suction power and a wide brush, the vacuum sucks regular dirt, small particles, pet hair and various detritus in a snap. The 360-degree camera on top offers smooth navigation, allowing it to move from room to room without bumping into other objects.

Like other robot vacuum cleaners, the Dyson 360 can be paired to your smartphone via the special Dyson application. By having the app, you can have a complete control over your robot cleaner from your smartphone.

Rather than bending down and pressing the buttons on the cleaner, you can now start, stop, and pause cleaning runs from your smartphone (iOS or Android). With the scheduling tool, you can set individual day cleaning programmes.

The app also provides the complete map of the area your robot has cleaned, places where it wasn’t able to get to, the path it took to clean your room and also shows the battery level and time it took for the robot to complete the task. Using the app, you can even switch between the two cleaning modes – ‘Quiet’ and ‘Max’.

The app is regularly updated by its developers with features enhanced or added, and lets you keep a check on its activity, manage the schedule, and get important alerts regarding the cleaner.

For a machine that is intended to get into each messy alcove and crevice in your home, it should come with easy, hassle-free maintenance. Thankfully, the Dyson 360 Eye has been designed to be dismantled so you can without much of a stretch clean each part.

The thing you’ll invest the most amount of time cleaning, of course, is the robot’s dustbin, which is at the front of the machine and which is evacuated utilizing a small release catch on the top of the vacuum. Simply pop the bin off, take out the bin filter, and you can without much of a stretch empty the dustbin. At last, the brush bar can likewise be easily removed.

Keeping up the Dyson 360 Eye is as effortless as it could be, and it’s happy to see Dyson concentrating on enabling you to clean parts instead of essentially supplanting them when they get dusty. You’ll need to replace these parts in the end, however, the robot’s build-quality makes it simple to deal with them and expand their life expectancy.

The Dyson 360 Eye provides outstanding cleaning on all types of surfaces. The high-power machine and long Dyson brush do their job brilliantly and never fail to impress.

Unlike other robot vacuum cleaners, the Dyson 360 isn’t blind! The appliance features a 360-degree camera that makes the robot cleaner see in every direction simultaneously, navigate smoothly across the room, while also avoiding obstacles or frequently bumping into things now and again.

Some claim the Dyson 360 Eye, the Land Rover of robot vacs! Rather than wheels, the vacuum has two tilting tank tracks that tackle elevation changes without a hitch. Even on thick rugs, the cleaner never jams or slows down, instead, it glides smoothly across all surfaces.

A neat and clean app, with some amazing features

The appliance is much taller than other robot vacs available in the market, making it impossible to do cleaning under low-profile furniture such as sofas.

The Dyson 360 lacks the spinning side brushes that are common on many rival units. These side brushes help cleanroom corners and crevices.

Rival units such as Botvac Connected employ magnetic strips to create no-go areas, such as avoiding pet litter or children’s play areas. But this important feature is missing in the Dyson 360.

The 360 Eye takes around 3 hours for a complete charge, with an expected run time of 45 minutes only. But on the other hand, its competitors such as the iRobot Roomba 980 and Neato Botvac Connected can run up to 2 hours on a single charge.

The cleaner has a very small bin capacity of 0.33 liters, which means you need to empty the bin frequently after cleaning processes.

The 360-degree camera requires decent light to see clearly and navigate across the room.

After performing various tests and completely reviewing the machine, all we can say that the Dyson 360 Eye provides outstanding cleaning results while also incredibly easy to maintain. Savvy, efficient, and powerful – if the Dyson 360 is a little shorter, it would be perfect.